North Bay Film has been a local tradition for over 25 years. We are a non-profit, volunteer-run community of film lovers seeking out culturally-enriching and critically-acclaimed films.

Programming for North Bay Film is brought to you by the Near North Mobile Media Lab, a non-profit media arts organization dedicated to providing students, artists and audiences in Northern Ontario the means to produce, present and enjoy media art.

Every November, we are proud to present the North Bay Film Festival at the Capitol Centre theatre in downtown North Bay, building on the legacy of the All Canadian Film Festival (2003-2013), and Doc North (2011-2014).

North Bay Film is a member of the Toronto International Film Festival Circuit.

Follow North Bay Film on Facebook and visit northbayfilm.ca to stay up to date with the latest news on screenings and cancellations. 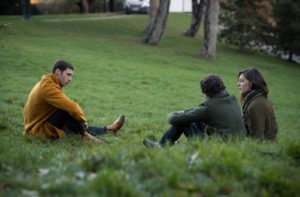 A young Israeli man, aided by his trusty Franco-Israeli dictionary, travels to Paris to flee his nationality. French and Hebrew with English subtitles.